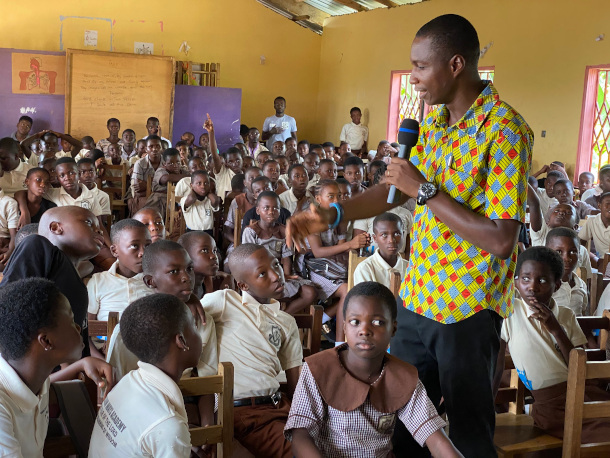 Chibeze Ezekiel giving a talk on climate change to schoolchildren in Ekumfi for his “Children for Climate Action” program. (Credit: Goldman Environmental Prize)

For Ghanaian environmental activist Chibeze Ezekiel, the climate and pollution risks of a proposed coal-fired power plant in a coastal fishing community of his country were too high. So he organized a grassroots youth campaign and convinced the government to drop coal and invest instead in renewable energy. He’s a recipient of the 2020 Goldman Environmental Prize and joins Host Jenni Doering to talk about the campaign and powering Ghana sustainably.

In 2013, the government in Ghana planned to build a 700 MegaWatt coal power plant in the coastal fishing community of Aboana. But for Ghanaian environmental activist Chibeze Ezekiel the risk of a coal fired power plant was too high. He’d seen how coal had polluted other African communities and was worried it would worsen climate change. So, Mr. Ezekiel organized a grassroots youth campaign and successfully convinced the government to drop coal and invest instead in renewable energy. For his work Chibeze Ezekiel received this year’s Goldman Environmental Prize for Africa. And he joins me now. Welcome to Living on Earth, Chee!

EZEKIEL: Thank you very much, Jenni for this opportunity.

DOERING: So, talking with other youth and thinking about climate change yourself, what really compels you to get involved in this? Like, why is climate change something that you really care about, and you've worked so hard to address?

EZEKIEL: When I got introduced to climate change in 2009, because it was basically a new concept to me, it was more about reading around it, hearing people's story, I was hearing about climate impact. But because I didn't get that physical experience on what it means to suffer from climate impact, I didn't really appreciate the magnitude of what climate change can do, until had a chance to visit one community, the fishing community, in south part of Ghana. And where the sea had actually submerged a whole community. So for me, that was when I started thinking that wow, so this climate change is really serious. I mean, I thought that was just something I was reading on the internet. So that actually made me realize that no, this is something happened in Ghana, not in any other part of Africa or the world, but close to my in my country. So then that's actually ignited, you know, the passion to start the advocacy that we need to treat this as an issue of emergency. And make sure we try to fight, you know, its impact until it becomes extremely devastating.

DOERING: Could you just describe for us this region where the Ekumfi coal plant would have gone that you helped to organize to stop? What's it like there?

EZEKIEL: Yes, Ekumfi is in the central region of Ghana. It is not a very developed area. People are still living in abject poverty with limited social amenities. So there are seven small, small communities within Ekumfi. We actually knew that our task was a very big one. So we certainly have to be very strategic if we have to win this battle. So to begin with, we adopted what I want to call the submarine approach. In other words, we did a lot of underground work, without coming out without making noise. So we went to the community, Ekumfi, and spent about three or four days with the people in our community. We spoke to the chiefs, we spoke to the elders, the woman groups, the youth groups, the fisher folks to get their view of the coal plant. And fortunately for us, we some of them, I mean, publicly, you know, openly told us that they're not in support of the coal plants because of similar experiences they had or heard in other communities. So again, we started mobilizing. 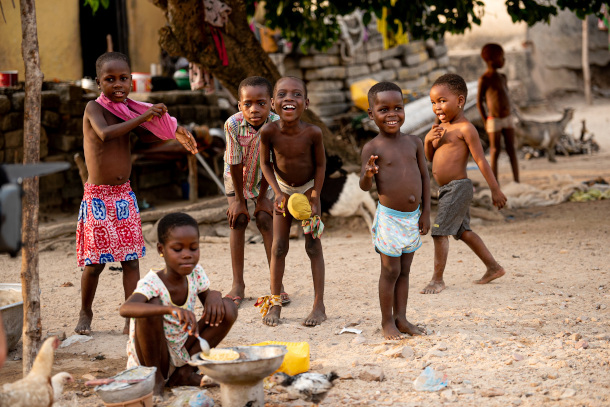 Children in the coastal fishing community of Aboana, Ghana, where the 700-megawatt coal-fired power plant was proposed to be built. (Credit: Goldman Environmental Prize)

DOERING: I know that Ghana, it does actually enjoy one of the highest rates of access to electricity in Sub-Saharan Africa at over 80% of its citizens having electricity, but there are these frequent supply shortages. So, I can imagine how compelling the idea of a giant new coal plant would be to so many who are concerned about electricity. How does that kind of conversation play out in the campaign with you convincing decision makers and locals that yes, electricity is important, but there's a better way?

EZEKIEL: At that time, around 2015, Ghana was in a lot of energy crisis. The demand for power was more than government could supply. Indeed, companies were collapsing. Indeed, people were losing their jobs. I mean, we're not having constant energy supply. So at that time, government was under pressure to solve that problem. And we're also due for election in 2016. So every government automatically wouldn't want to lose, they really want to be voted back into office. So the fact that building a coal plant will solve the problem so people can trust them as they vote for them in 2016. The argument we made was, now we are relying on South Africa for coal, which means we don't have control over the source or the raw materials. So the issue of sustainability was not guaranteed. We cannot put our hope in that to create more problems for ourselves. So we said, well, we thought we this we have this sun, you know, this natural sources, you know, in abundance. They are reliable, they are available, the sun keeps shining all the time, the wind is blowing all the time, the sea is always there. And as we've talked about sustainability, their renewable energy or clean energy is better, you know, as compared to putting our hope and our trust in coal which has been imported from South Africa, which we don't have control over. So this way, I made a key argument you made in that regard. 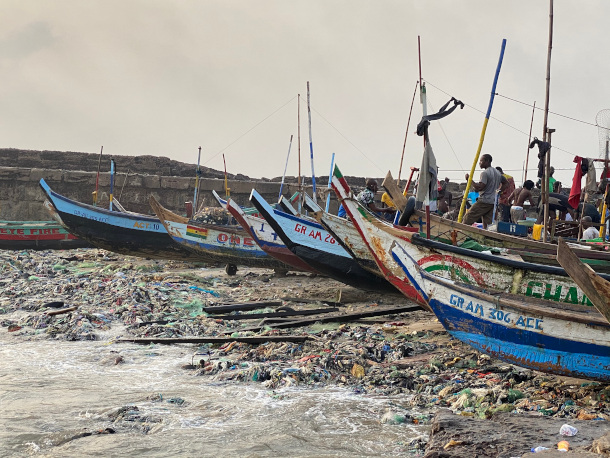 EZEKIEL: You know, campaigning or advocacy is not an issue of emotion or an issue or feelings. If you are fighting government, you want to come up with a very stronger argument, because government needs solution. They want immediate solution. So if you're coming with an alternative, then you have to be more powerful than what government itself was thinking. So using a submarine approach: go low, learn more, do more research, do more engagement, get the right information. So by the time you come out, you know, you're speaking based on fact, based on evidence, and that becomes even a means to influence government to buy into your decision. I believe strongly that our approach worked very well. We are youth group. We don't have the resources. We don't have the muscle, you know, to wrestle with government for years or for months. But we also don't have the money to go to court to challenge government. We don't have a lawyer, you know, we're talking about the grassroot movement, young people. So based on what you have with our limited resources, what can we do to achieve the impacts or the objective that we anticipate? So by the time we came out publicly, I mean it tooks us about five to six months to achieve our end.

DOERING: Wow, that's actually a pretty quick turnaround in terms of campaigns, so congratulations on that success! So instead of the coal plant, to what extent are renewables like wind and solar energy being installed in the Ekumfi region and helping bolster the energy supply?

EZEKIEL: Yes. So even though the pace is quite slow, there has been some effort to develop renewable energy in Ghana. Specifically, I've not sighted any solar plants or any wind plants being put up in Ekumfi. But I am aware that there are communities close to Ekumfi that's have solar farm. Initially, it was 20 megawatt solar farm. And now we have an additional 20 megawatt solar farm by a Chinese company. So we have about 40 megawatt solar farm, you know, a place that is not too far from Ekumfi. But what we are trying to promote is that if at the National Grid, were able to develop renewable energy, then government can even get power to supply, to organize, including those in Ekumfi. At a point, we got to know that Ghana has about 200 islands, which means that those communities are off grid, because it was quite expensive to send to put up transmission lines, or there were two those communities. So in those communities, they're putting up solar mini grids. So those communities today as I speak, have access to electricity. So increasingly, we are having some levels of adoption.

DOERING: So Chi, what are you focusing on now in your activism? What's on the horizon for you? 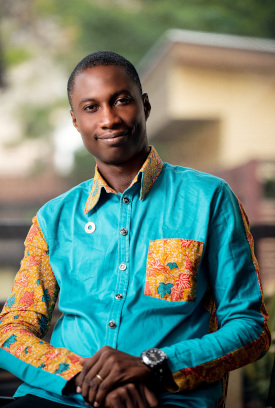 EZEKIEL: We have formed what we call the Youth in Renewable Energy Movement campaign. So there's a whole movement of young people in renewable energy making all the advocacy work, all the campaign, to support governments effort on renewable energy. We're also running a Youth in Climate Action Campaign, where we are building a capacity of young people to participate in Ghana's national adaptation plan processes, as well as the development and now the review of our NDCs in our leading to the implementation. So that does what we are doing now; building our capacity to participate in the decision making process. So eventually, we can all collectively fight, you know, the climate change that we all seek to do

DOERING: Chibeze Ezekiel is a board member of 350 dot org, and the Africa Recipient of the 2020 Goldman Environmental Prize. Thank you so much, Chi.

EZEKIEL: Thank you very much for the opportunity, Jenni.


Goldman Environmental Prize | Learn more about Ezekiel and his campaign