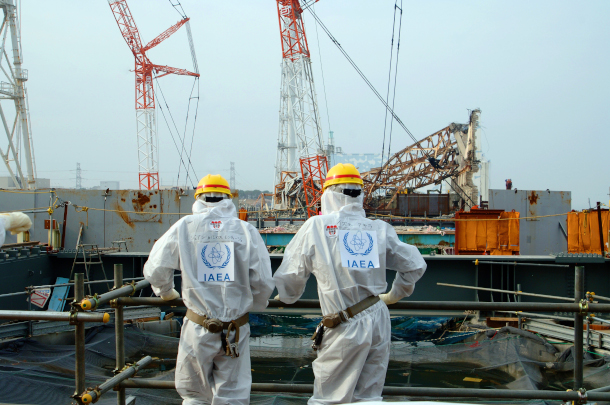 Ten years after the Fukushima Daiichi nuclear power plant disaster, millions of gallons of radioactive cooling water are about to overflow storage tanks. Japanese authorities are looking at the option of releasing it into the Pacific Ocean. Arjun Makhijani, President of the Institute for Energy and Environmental Research, joins Host Bobby Bascomb to mark the tenth anniversary of the reactor core meltdowns and what the release of the contaminated water into the ocean could mean for marine and human health.

At quarter to three in the afternoon of March 11th, 2011, a magnitude 9 earthquake moved the main island of Japan eight feet, and launched a tsunami four stories high into the region of Fukushima, Japan, killing thousands and flooding a nuclear power complex.

BASCOMB: In the hours and days that followed, the cooling systems failed and the uranium cores in the three operating nuclear power reactors partially melted down releasing deadly radiation. Authorities were eventually forced to evacuate an eighty square mile zone around Fukushima. It was the worst nuclear accident in history with the exception of Chernobyl in 1986, and the Fukushima accident is not over yet. At least 2 cooling pools to prevent further meltdowns in the broken reactors are leaking into the ocean, forcing the pumping in of even more water. TEPCO, the Toyko Electric Power Company that operates the complex, will run out of space to store the radioactive water sometime next year. TEPCO and the Japanese government have plans to dump much of it into the Pacific Ocean, leading to an outcry from the public. For more I’m joined now by Arjun Makhijani, President of the Institute for Energy and Environmental Research. Arjun, welcome back to Living on Earth!

MAKHIJANI: Thank you for having me back. I love being on living on Earth.

BASCOMB: We've always been told that the solution to pollution is dilution and the Pacific Ocean is very, very large far dwarfs the water they would be releasing into it. What do you say to that argument? 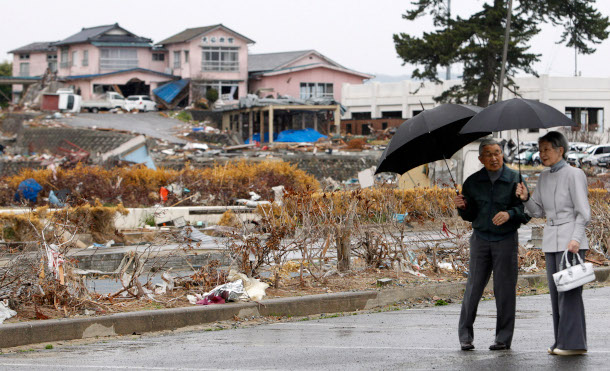 Japan's Emperor Akihito (L) and Empress Michiko visit at an area which was devastated by the March 11 earthquake and tsunami in Soma, Fukushima prefecture, about 50km from the crippled Fukushima Daiichi nuclear power plant, May 11, 2011, on the two-month anniversary of the quake and tsunami. (Photo: Greg Webb , Reuters, Flickr, CC BY SA 2.0)

MAKHIJANI: Yeah, now they're not going to pump the whole Pacific Ocean and dilute it in the whole Pacific Ocean, that's one thing, they're not going to do that. So, they're going to dump it near the shore, the vertical mixing in the oceans is extremely slow. So, it is going to remain for some time in the surface waters. Of course, it will be diluted somewhat, so it will impact the shore more, but tritium has a half-life of 12.3 years. There's also a lot of strontium which mimics calcium in the body. Now, one thing to know about strontium 90, because it mimics calcium it goes to the bones, it becomes part of the bone marrow. Our immune system stem cells arise in the bone marrow. And the immune system of the fetal development is more complicated but it is a hematopoietic system and when you are putting radioactivity into a place where your immune stem cells are originating, you're compromising all aspects of health. And these are aspects of radioactivity that have not been adequately studied. And I think before an organization like TEPCO is allowed to pollute the oceans with strontium and tritium, which can cross the placenta, not only in human beings, so you know, we're not going to drink seawater, but the biological systems, the reproductive systems, the energy system, specially, a lot of our immune systems are very common between human beings and a large variety of animals, including fish. And so I think it should be on them to demonstrate that this is not going to severely disrupt the reproductive and energy systems of the living beings where they are going to dump this.

BASCOMB: Well, you can see how Japan is in a real pickle here. I mean, the cooling pools are filling with this radioactive water, they can't keep it there forever. What are their alternatives are there for them?

MAKHIJANI: Yeah, dumping it in the oceans is the most polluting, and in my opinion, the worst, they can evaporate it slowly and emitted into the air, there is some natural tritium that mother nature makes in the atmosphere, if it is small relative to that the ecological impact would be much lower. And the third option is simply to extract the tritium separating the treaded water would isolate it concentrated, and it could be used in biological research and exit signs and so on. It is proposed to be used in fusion reactors, you know, a large one is being built in France. It could be mixed with cement and put in storage for the long term. And one of the things is that the long term storage would be, you're talking 70 or 80 years by which time it would almost totally decay away. So, there are options available that have much, much less ecological impact, they are more costly. But in the scale of decommissioning costs, and dealing with the Fukushima, none of these alternatives appeared to be very costly. So we're talking about decades, and hundreds of billions of dollars, but then think that you are setting a precedent for how to handle a difficult situation in a way that's respectful of future generations that’s respectful of ecosystems and that's respectful of your neighbors. 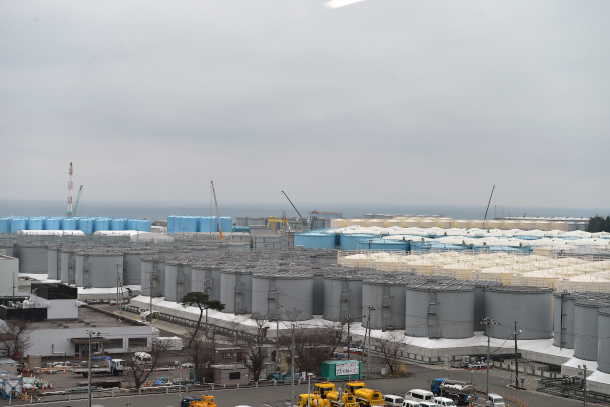 The Japanese government alongside TEPCO (Tokyo Electric Power) are planning on dumping 1.2 million tons of water contaminated by radioactive substances from the Fukushima disaster into the Pacific Ocean. (Photo: Dean Calma, Reuters, Flickr, CC BY 2.0)

BASCOMB: You know, of course, there's an exclusion zone around the Fukushima facility, and I've read that like Chernobyl, there's actually all manner of wildlife returning to that area, things like wild boars and snow monkeys. I don't know is that perhaps a small silver lining here?

MAKHIJANI: Well, you know, we saw that in the pandemic, too when the economies were shut down, wildlife started coming back all over the place. The difference here is that this wildlife is now in a radioactive environment. There's been a fair amount of research in Chernobyl as to the genomes of the creatures that inhabit the Chernobyl contaminated zone. And there has been significant genetic damage to this. So it's not like you're bringing pristine wildlife and then, you know, nuclear accidents cause human beings to withdraw and therefore Mother Nature will be happy. No, to the extent that I can tell Mother Nature, in the sense of respecting the genomes of the creatures as Mother Nature has evolved them is not happy.

BASCOMB: You know, it's disasters like Fukushima that have people so concerned about the safety of nuclear power. But at the same time, much of the world, including President Biden, and the US is pledged to decarbonize their economies to avert the worst-case scenario for climate change. And nuclear can be a component of that. How can we square the need to rapidly decarbonize and the legitimate concerns about the safety of nuclear energy? And for that matter, how to handle the nuclear waste that comes along with it? 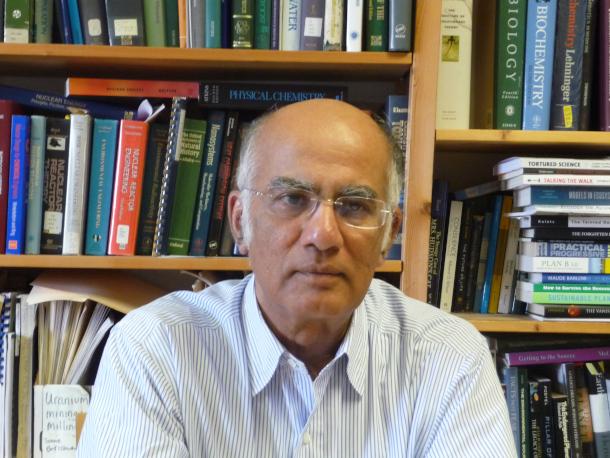 Arjun Makhijani is President of the Institute for Energy and Environmental Research and author of books focused on the safety, economics and efficacy of various energy sources including nuclear, wind and solar. (Photo: Courtesy of Arjun Makhijani)

MAKHIJANI: Okay, so I've looked at this problem as an electrical engineer, there is a shortage of two things I think we can all agree, there's a shortage of time, because we've wasted so much and not done things early enough 30 years ago when we should have started, and there's a shortage of money. There's not a shortage of low carbon electricity sources. I have done an hour-by-hour assessment over a four year period of can you actually have a solar and wind electricity system almost exclusively, with smart grids and storage and peaking electricity supply. A lot of technical paraphernalia around the solar and wind system. Can you make it work reliably? And what will it cost? Suppose you did not have nuclear. And the answer to that, to my own surprise, I concluded that it was possible, feasible and economical. Now 14 years ago, I thought it would be very difficult, because that was a time when solar energy was still very expensive. And battery storage of electricity was also very expensive. Now, things in the energy sector have undergone an absolute technical revolution in the last 14 years. Solar and wind electricity are now the cheapest sources of new electricity. That's not Arjun talking, that's Wall Street talking. Wall Street firm, Lazard publishes a cost estimate every year of the costs of new electricity sources. Solar and wind are estimated about $40 a megawatt hour nuclear is estimated at about $160 a megawatt hour about four times as much. Now solar and wind need, you know, battery storage demand response, they need other things, but that delta between 40 and 160 is vast. You can accommodate a reliable, resilient, renewable energy system for cheaper than doing nuclear. From a time and climate urgency point of view alone, we should not be investing in nuclear. Then you can look at the field history of nuclear power to address climate change in this country. Fifteen years ago when Congress started taking up the issue of climate there was also announced a nuclear Renaissance that was about 2005 in the Energy Policy Act that was passed that year. There were applications for more than 30 reactors as a result of this, you know, government support streamline licensing, it was all going to happen, modular reactors. Of those more than 30 reactors, essentially, all are dead except two. Two are being built in Georgia, Vogtle 3 and 4. They are hugely over cost and hugely delayed they were supposed to come online years ago. So this promise that nuclear was going to somehow solve the carbon problem has already failed and just purely from a business point of view we can't afford it.

BASCOMB: Arjun Makhijani is president of the Institute for Energy and Environmental Research. Arjun, thank you so much for taking this time with me today.

MAKHIJANI: Thank you very much for asking me.

Listen to Living on Earth’s report on Fukushima in 2017