Nature and the Beat

A Beast Box Orangutan and a Bornean Orangutan. (Image: Russell

From the chirp of a Katydid to the screech of a parrot, the sounds of nature are all around us and now can be used to help humans make music. Living on Earth’s Bobby Bascomb reports on Beast Box, a website that allows users to create their own unique songs using catchy beats and animal calls as the instruments.

BASCOMB: Those Orangutans in Borneo share habitat with their smaller primate cousins, the gibbons, whose howling calls can travel up to two miles across the dense rainforests. Many animals make some sort of sound to find a mate, warn of predators, or claim and defend their territory. And now their sounds can be used to create music from your home as a fun diversion for all ages during this year-long pandemic.

BASCOMB: For many of us the staccato notes of a katydid might conjure up memories of a warm summer night, but for Ben Mirin a katydid’s chirp is music.

MIRIN: I hear music in everything.

BASCOMB: Ben calls himself a Wildlife DJ. He travels the world as a National Geographic explorer to record animal sounds. And with help from the Cornell Lab of Ornithology, Ben created a website called Beast Box where users can layer animal sounds over a beat to create their own compositions.

MIRIN: I’m just a messenger for the intricately tuned voices of the natural world. And the fact that nature is always singing is something that is really exciting to me and I hope can create similar excitement and joy others.

BASCOMB: To make a song users open the website and then choose one of 7 beat tracks that Mirin created himself. You can choose - say Great Barrier Reef beat… 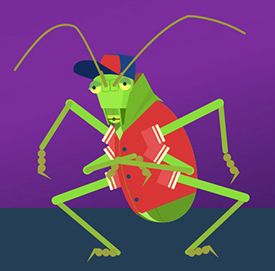 BASCOMB: Then select an animal sound, there are 30 of them. You can add as many as five at a time to create a song. So, let’s say you choose a coyote….

[CALLS OF COYOTE IN CLEAR OVER BEAT]

BASCOMB: Then an eastern whip-poor-will …

[MUSIC WITH ADDED IBIS OVER BEAT]

BASCOMB: And lastly a Blue Wildebeest.

[MUSIC WITH ADDED WILDEBEEST OVER BEAT]

BASCOMB: Put them all together and your song is complete.

[MUSIC PLAYS, THEN FADES TO BED]

BASCOMB: On the website there is a paragraph description of each animal and an explanation of their habitat. Each time a user chooses an animal musician, a graphic of that creature pops up on the screen and dances to the beat. For instance, there’s an orangutan in a red leather jacket and matching sunglasses.

[CALLS OF ORANGUTAN WITH BEAT BACKING]

BASCOMB: And a tropical Boubou wears a gold chain and a red cap.

[CALLS OF BOUBOU WITH BEATS]

BASCOMB: Mirin hopes beast box will be fun for anyone but the graphics and the genre of music are geared towards kids like 12 year old Orion Brown. Orion says he likes playing with the website. 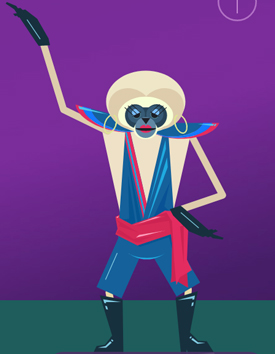 BROWN: I think it’s pretty cool. It’s a way to get a good education but also have some fun.

BASCOMB: For an additional challenge, users can try to put all of the animals from the same ecosystem together with the beat designed for that environment – it’s called Beast Mode. Orion chooses the Madagascar Rainforest.

BROWN: The first animal in that ecosystem is the Indri.

BASCOMB: Neither of us know what an Indri is. So Orion reads the description -- turns out they’re lemurs.

BROWN: A small group of Indri wake up in the treetops and begin their morning shout outs. Indri are large for lemurs with booming voices amplified by enlarged throat pouches.

BASCOMB: Alright, what’s next in the Madagascar rainforest?

BROWN: The next one is the Lesser Vassa Parrot. 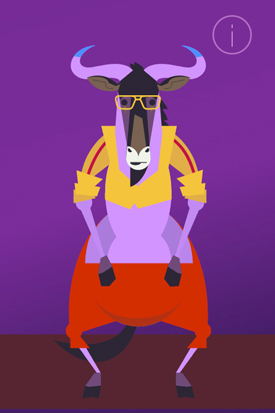 BASCOMB: He finishes up with the Madagascar Long Eared Owl, the Red Fronted Coua, and the Souimanga Sunbird.

[“BEAST MODE” THEN SONG PLAYS AND FADES TO BED]

BASCOMB: So what do you think of the song you made?

BROWN: I think when you mash them up with all the ecosystems together, it sounds better, almost like it’s sort of made for the beat.

BASCOMB: So, you mean when you have all of the same ecosystem, like all of the desert or the rainforest or so together?

BASCOMB: Do you think that maybe they evolved and they lived together in the same forest and making music together it comes kind of naturally. What do you think of that idea?

BASCOMB: Ben Mirin says that Orion is on to something, thinking that the different animal voices complement each other.

MIRIN: Yeah, I would agree with his observation. Animal voices have evolved over millions of years to occupy different acoustic niches in an ecosystem so they don’t compete with one another.

BASCOMB: Making yourself heard is critical to surviving in nature. That’s how whales find mates across the ocean and coyotes defend their territory in the desert. Animals living in the same environment are already tuned to work well together so everyone can be heard and Mirin is excited about tapping into that existing symphony of sounds.

MIRIN: As a producer that means my instruments are already mixed. So instead of being a solo musician I get to be a messenger for the finely tuned orchestras of the natural world. 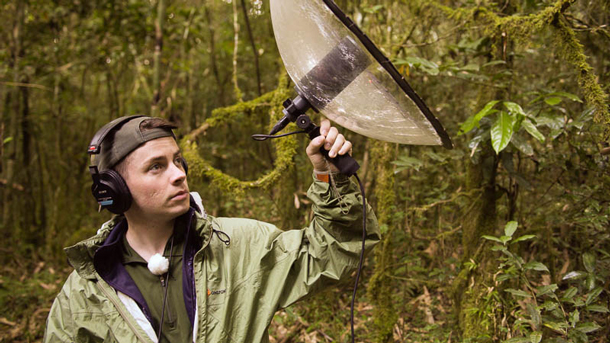 BASCOMB: Mirin says what he wants is for Beast Box to help people learn about nature and create a connection with the natural world.

MIRIN: At the end of the day understanding and connecting with nature is critical to falling in love with it and we can’t save what we don’t love. So, I would hope that this opens a pathway for you to find your own sense of connection and love for nature so that you can be inspired to protect it because this is a collective future we all share.

BASCOMB: And there’s much more about Ben Mirin and his Beast Box on the Living on Earth website, loe.org.