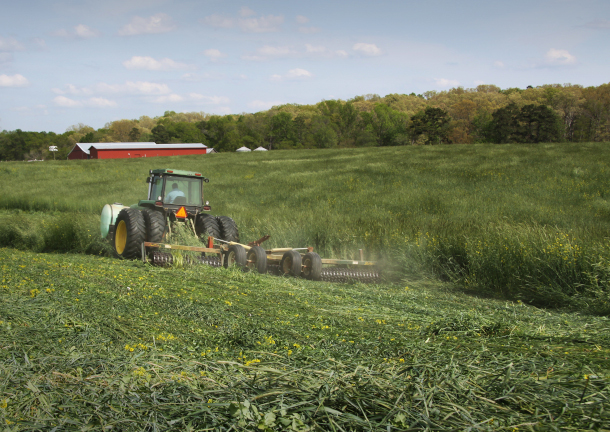 A farmer in North Carolina cuts down a cover crop just before planting corn. This blanket of vegetation will reduce erosion, and provide season-long weed protection, moisture retention, and food for microbes in the soil. (Photo: Natural Resources Conservation Service (NRCS), Flickr, CC BY 2.0)

Regenerative agriculture practices that store carbon in the soil are a “win-win-win” for farmers, the economy and the environment, say advocates who claim widespread adoption of no-till, cover cropping, and other practices could perhaps store as much carbon as the global transportation sector emits every year. Nicole Lederer, co-founder of Environmental Entrepreneurs or E2, joins Host Steve Curwood to discuss the connection between healthy soils, the climate, and the economy.

Greening energy systems is key to addressing the climate emergency, but science suggests we also need to harness nature to take carbon out of the air and bank it in forests, grasslands, and the soil. A 2017 study in Nature estimated that widespread adoption of so-called regenerative farming could perhaps store as much carbon as all the cars, trucks, ships, trains and planes combined emit every year. And financial support for such farming could help companies offset all of their carbon pollution by 2030. A recent report from Environmental Entrepreneurs or E2 explores how keeping carbon in soils can reward farmers as well. Here to discuss is Nicole Lederer, chair and co-founder of E2. Welcome to Living on Earth!

LEDERER: Thank you very much, Steve.

CURWOOD: So tell me, why do you say that building healthy soils that can hold more carbon is a win-win-win and talk about who you see as the winners here?

LEDERER: Well, the winners are across the board. I have quite a few years behind me in policy advocacy. And it's rare that I have the opportunity to advocate for policy where there are only winners. And the winners here are farmers, the economy broadly and more specifically agricultural technology, and the environment, which benefits in myriad ways, and most importantly, in this context, in the fight against climate change. We're all aware now that simply reducing or even eliminating the global warming emissions that come from our industries, our transportation, our energy generation sectors, that that will not be enough to avoid the worst impacts that are coming our way from climate change. And that, in fact, what we need to do simultaneously is actively and aggressively remove the carbon we have already emitted from the atmosphere and store it. Now, many of the technologic solutions to this are still on the drawing board. They are, in fact unproven. And they will no doubt, at least initially, be extremely expensive. By contrast, the ability of natural systems to remove carbon from the atmosphere and store it in living systems, in the soil, in forests, in prairie, that is a system that has existed that is as old as the earth itself. And that we can maximize, so as to have a significant impact on carbon removal. 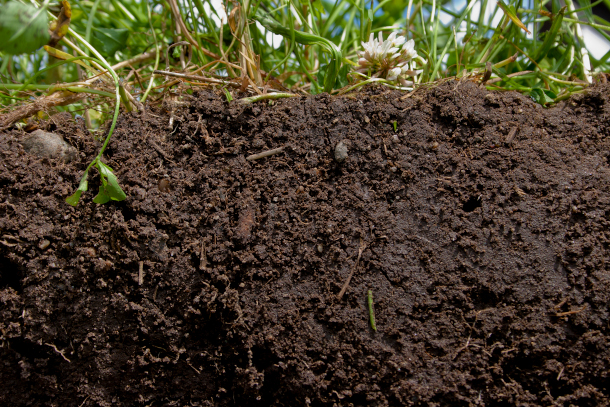 This is an example of what healthy soil looks like. This soil was from the use of a diverse set of crops, grasses, and cover crops. (Photo: Catherine Ulitsky, USDA-NRCS, Flickr, CC BY 2.0)

CURWOOD: Now, what you're talking about here is regenerative agriculture. And one of the techniques you suggest might be useful is the use of cover crops. In other words, growing something on the land when it's not in the crop cycle. And yet, very few farmers now in America seem to be doing that. How do you get the numbers up for cover cropping, and what's in it for farmers?

LEDERER: So regenerative agriculture broadly refers to deploying practices that restore nutrients to the soil as you also harvest crops. And those practices are as old as agriculture itself, and they include low- or no-till practices where instead of removing the crop residue after harvest, you leave it in place and eventually plant into it. It also includes crop rotation, instead of planting the same one or two crops repeatedly on the same fields, and the use of compost. And cover cropping is one of the practices that has been shown to retain much more carbon in the soil, and that avoids leaving vast acreage bare between harvests. There are policies that we can enact that will increase the acreage that uses cover crops, there are currently policies in place that discourage the use of cover cropping.

LEDERER: Yes, and many of those have to do with crop insurance policies. There are incentives to not plant crops between your harvested crops currently in USDA policy, and that would be something that would be very useful to change. Also, for all of these practices, anything that involves a change in cultivation practices for farmers involves some degree of risk. Changing from what you do and have done for years to something new, not only involves the risk in terms of experience, but also the potential that you may have to invest in materials or new equipment. And that kind of changeover requires financial support, farmers are not sitting on a big slush fund of money to try new things. So looking at USDA, to channel the funds they distribute for the benefit of farmers and the climate is the goal here.

CURWOOD: Now USDA is famous for providing farmers with the crop insurance that you plant X and if you don't get Y yield, you'll get at least a price support for what you do have. So how does regenerative agriculture resonate with that approach? And how is it dissonant with it?

LEDERER: Well, one of the terrific benefits of regenerative agricultural practices is that it provides a greater degree of security in terms of outcomes, regenerative agriculture and soil health build resilience, in terms of crop resilience against extreme weather, whether that's drought or flooding. Against pests and weeds and all of the challenges that farmers face that they can't control. Building soil health, and increasing soil carbon, which contributes to the soil structure that supports life, is a way of reducing the risk of those crops. Once those risks are reduced, what we're looking to see is a corresponding reduction in the cost of crop insurance. And that is a way to incentivize farmers to take risk reduction methods that would actually reward them financially in reducing the cost of their crop insurance.

CURWOOD: And of course, lower the burden for taxpayers. 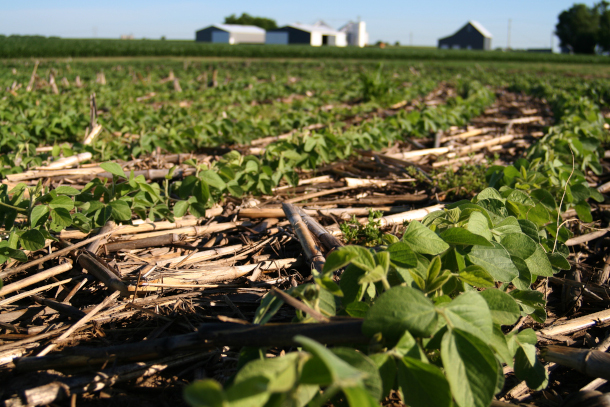 CURWOOD: So the notion of the soil sequestering carbon is getting a lot of attention in the investment world. A lot of talk about, hey, maybe carbon offsets can be created by farmers who adopt these techniques. Of course, if you're going to try to sell something, you need to measure it. How can you really measure how much carbon is being sequestered in a soil system?

LEDERER: So the arena that you're talking about is generally referred to as agricultural technology, or ag tech. And the way we currently have measured soil carbon is through soil sampling. And that produces a lot of important information, but on a very limited scale. You can only literally take physical samples of soil in a given acre so many times and there are many, many, many acres to sample. So, some of the technologies that are being developed around that involve aerial surveillance by drone or even by satellite to detect the changing carbon content of soil across a much bigger space, a much larger geography real time, and of course, much cheaper than we can do now.

CURWOOD: How reliable is that technology now, though? Today, if you wanted to call a service to either get a satellite pass reading or to have an aerial review of one's land, how reliable is the data that's now currently available?

LEDERER: Well, that data is being generated now. And in the report that E2 released recently, on the topic of agricultural carbon removal, we profile one company that does just that. This is part of the spectrum of products that fall under the heading of precision agriculture, which is a very well developed sector looking at how to produce more efficiently in the ag sector. And we have really advanced technology, allowing farmers to be very specific about where they apply fertilizer, where they apply pesticide or water, etc. And these monitoring technologies are already deployed widely. And they make use of satellite and drone data. So applying that to soil carbon is not a big leap. It's not widely deployed, but it is definitely in the pipeline.

CURWOOD: Now, of course, there's controversy about carbon offset credits from parking it in the soil. In fact, some are worried that trying to put this into the international negotiations could generate pushback. Countries like the US uses as an excuse to not do other things to hit the Paris targets. What do you think? 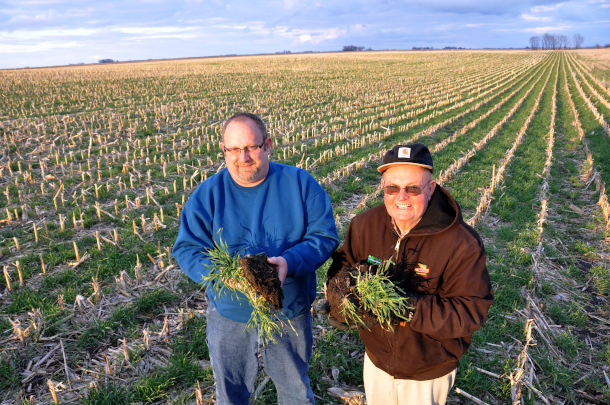 Farmers Todd and Arliss Nielsen hold up chunks of healthy soil, full of their ryegrass cover crop on their no-till corn field. This no-tillage and cover cropping will build organic matter and may reduce the amount of nitrogen fertilizer they need to apply next season. (Photo: Lynn Betts, NRCS, Flickr, CC BY 2.0)

LEDERER: I think it's really important to be sure that if we are going to include in our accounting, that natural systems can be maximized to pull additional carbon out of the atmosphere, we need to be sure that the math is accurate, that we really are reducing atmospheric carbon, not just allowing for current emissions levels to continue while we offset them with reduction methods. What we're looking to do here is go carbon negative. And that is increasingly a goal of companies in the private sector. They're not only looking to lower their emissions, but in some cases to account for and offset past emissions.

CURWOOD: Nicole, these are all fascinating ideas. How do they get implemented in a practical way that works with crops and money?

LEDERER: At the state level, there exists already a number of policies that incentivize low carbon crops. The California cap and trade system is looking to reduce emissions associated with agriculture. And there's also a low carbon fuel standard in California and other states. Now that usually refers to emissions, but if farmers can also claim that in addition to reducing emissions, they've pulled carbon out of the atmosphere, that can create additional financial benefits to farmers. Now, at USDA, at the federal level, there are huge opportunities in revising crop insurance policies. There's also the potential of creating a carbon bank, as has been discussed by USDA already, that might provide low or no interest loans to farmers to deploy these practices. And we are definitely looking to the 2023 Farm Bill to see these policies instituted.

CURWOOD: Nicole Lederer is co-founder of Environmental Entrepreneurs, sometimes called E2. Nicole, thanks so much for taking the time with us today.

LEDERER: Thank you very much, Steve. It was a pleasure.


E2 | “Healthy Soils and the Climate Connection: A Path to Economic Recovery on America’s Farms”

AgFunder News | “Regenerative agriculture is getting more mainstream. But how scalable is it?”