Getting Bushmeat Off the Table 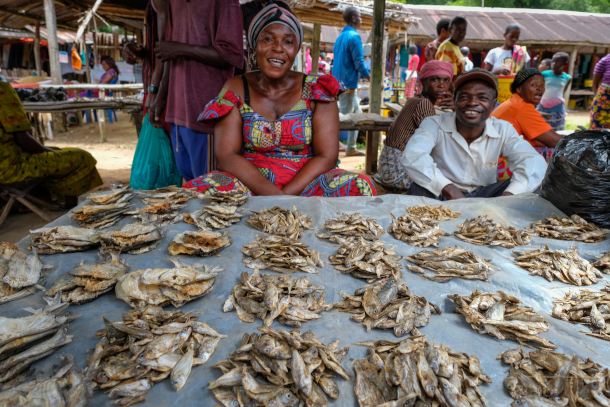 GETTING BUSHMEAT OFF THE TABLE: The forests of the Congo Basin are among the most biodiverse in the world. But as the region’s cities grow, the demand for forest bushmeat is threatening food sources for indigenous communities and endangered pangolins and monkeys. The government of the Democratic Republic of Congo launched a campaign encouraging people in cities like Kinshasa to cook traditional bushmeat recipes with protein alternatives that don't harm the region's biodiversity. Living on Earth’s Paloma Beltran joined Host Jenni Doering to talk about the bushmeat trade and this campaign.

DOERING: The Congo Rainforest in Central Africa is the second largest rainforest on the planet, after the Amazon, and it’s a treasure trove of biodiversity. Picture chimpanzees and bonobos swinging from branches; okapis and elephants making trails through the forest; and at least 10,000 species of birds singing in the canopy. But in the wake of a colonized past, the war-torn region has suffered political turmoil and years of conflict. Meanwhile the forest is being hollowed out by the rising demand for bushmeat in big cities like Kinshasa, in the Democratic Republic of Congo, and Brazzaville, across the border in the Republic of Congo. The wild meat trade can and does exist legally, but most of this meat in the cities is illegally sourced from poaching. Living on Earth’s Paloma Beltran has been looking into the problem, and she’s here now -- Hey Paloma!

DOERING: So why is bushmeat so popular in the DRC and Republic of Congo?

BELTRAN: So wild meat is part of Central African culture. I talked to Robert Mwinyihali he’s the bushmeat coordinator for the Wildlife Conservation Society and he’s based in Kinshasa.

MWINYIHALI: Wild meat is a social norm. You can see that when people are organizing marriage ceremony or funeral any other ceremony it is built around wild meat, right. When you visit somebody in the village, the only food they will present to you is bushmeat. So, full wild meat was a traditional staple in every forest region in Central Africa.

BELTRAN: And it’s being consumed more and more as cities grow.
Kinshasa in the DRC is one of the biggest cities in Africa; its population has grown by three million in the last five years. Now there’s more than six-teen million people.

DOERING: Wow - I think New York City is like 9 million, that’s not even close!
So do they all eat bushmeat? 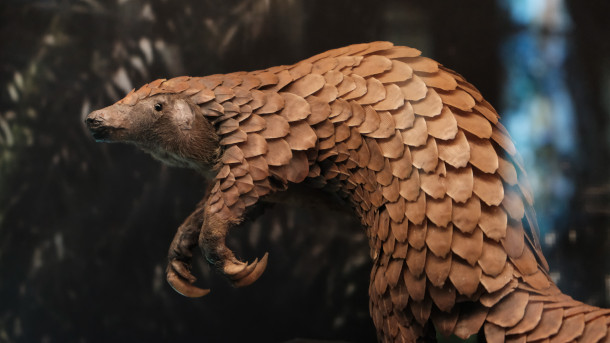 Pangolin in a tree. The animals, along with antelopes, monkeys, duikers and other wild animals have long been consumed as a part of traditional Congolese cuisine. Over-consumption of such animals is now threatening their future. (Photo: Louis Mornaud, Unsplash)

BELTRAN: Well it turns out that on average each person in the city of Kinshasa eats bushmeat about once a year at an important feast, and even that is putting huge pressures on wildlife. I talked to Robert’s colleague Michelle Wieland, the Africa Socio-economic director for the Wildlife Conservation Society.

WIELAND: Well, so we've already seen that wildlife species are disappearing from forests around cities. So if you go around Kinshasa, or even around towns like Kisangani, the forests are almost empty. Right, and we call it the empty forest syndrome. And so what happens is that you end up with communities, particularly indigenous hunter gatherers, who end up destitute because their whole culture and their whole food systems rely on wildlife.

DOERING: An empty forest… Paloma, that’s so sad, and I mean what are these forests without their animals?

BELTRAN: Yes exactly! Michelle also talked about how the health of forests depends on the existence of animals. It’s not just the animals that are being lost but the role they play.

WIELAND: So when you start to lose your big animals, which is what hunters go for first, so elephants, gorillas, buffalo, chimpanzees, what happens is that you lose your seed dispersers, right, because they eat the fruits that fall from the trees. And so if you don't have host animals to take those seeds, and move them around the forest, you end up with sick forests. And we all know that, these unhealthy forests can also lead to problems for all of humanity, because it increases that risk of zoonotic transfer, and just weak ecosystems.

DOERING: Right I mean we’re all dealing with the consequences of that kind of thing right now. 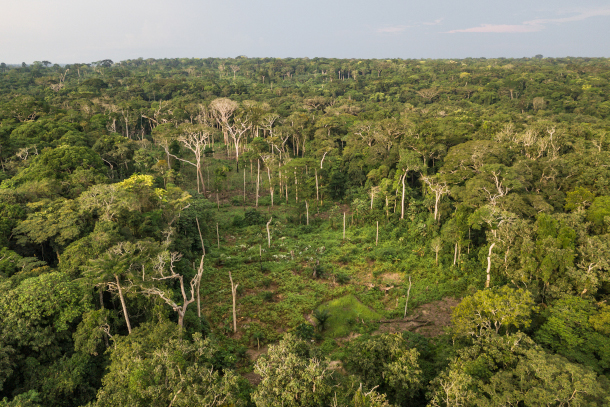 BELTRAN: Yes Jenni, and the Congo has experienced its fair share of zoonotic diseases like Ebola. And bushmeat is really hard to track and control. It’s often dried for preservation and by the time it reaches the city it’s hard to identify if the meat came from an endangered species. There have been several campaigns aimed at getting people in the cities to stop eating poached meat. But they’ve had little success. So the DRC government is trying something new.

DOERING: Oh, what are we cooking?!

BELTRAN: That’s Maman Muvaru [Maman Muvaru cooking] She is a celebrated Congolese chef and she’s joined this campaign to show people how they can switch out wild meat in traditional recipes for alternatives. For example she's cooking up a stew which is traditionally made with a kind of bushmeat like pangolin or antelope but it tastes just as good with goat. Cooked down with spinach, onion, tomatoes, okra, and garlic, until it’s…

BELTRAN: That means delicious in Lingala.

BELTRAN: Yeah I’m getting hungry! And what's cool about this campaign is that it’s focused on celebrating Congolese culture instead of suppressing it.

WIELAND: We really understand that meat is an important part of African cuisine. And we're targeting some of the wealthier people in the cities. Who can afford to try something new. We're inviting people to substitute it with local alternatives. Goats, caterpillars, smoked fish, fresh fish. 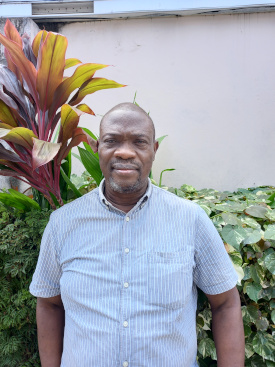 Robert Mwinyihali is the project director for urban bushmeat based in Kinshasa and Brazaville working for the Wildlife Conservation Society. (Photo: Courtesy of Robert Minyihali)

DOERING: Wait - did I hear that right, caterpillars?

BELTRAN: Yup! I’m not sure what they taste like but they're a good source of protein!

DOERING: Hey, I guess so! Hey so Paloma, how are people reacting to this?

BELTRAN: Well the campaign is huge. It’s all over the radio, tv, people are tweeting about it, and they have an instagram. And you know it just started in April so we don’t know what kind of impact it’s having yet. Or if it’s changing behaviour but Robert has worked for more than 20 years in conservation and he’s optimistic because this campaign is designed to cherish and elevate Congolese cuisine.

DOERING: Well, the illegal bushmeat trade is such a huge and daunting problem, but it sounds like they’re trying to break it down into bite size pieces!

BELTRAN: Yeah! You can’t protect wildlife and the indigenous communities who depend on it without considering the human part of the equation.

BELTRAN: You got it, Jenni!

Our Voices from United Nations University | “Bushmeat Stories: Voices from the Congo Basin”