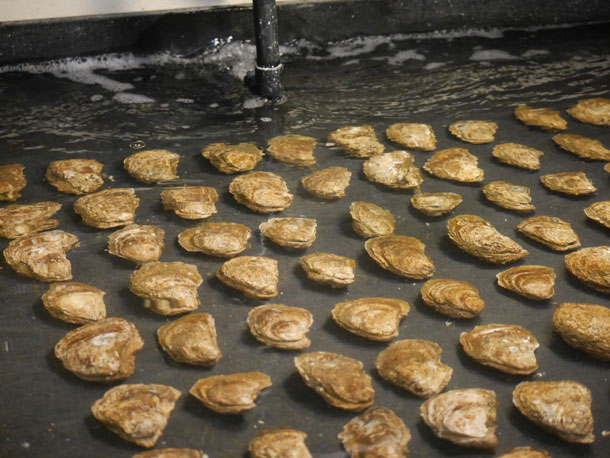 Fertilizer runoff can create massive algae blooms in water that suck up oxygen and creates dead zones for most other forms of life. The Chesapeake Bay is particularly vulnerable but as Kara Holsopple from Allegheny Front reports, restaurants in Pittsburgh are pitching in to help.

BASCOMB: The Chesapeake Bay is routinely inundated with fertilizer runoff from the surrounding watershed in parts of Pennsylvania and Maryland. The result is algae blooms that suck up oxygen in the water and create dead zones for most other forms of life in the Bay. Oysters are particularly vulnerable but as Kara Holsopple of The Allegheny Front reports some local groups have come up with a novel way to help oysters recover.

HOLSOPPLE: Jessica Lewis says shucking an oyster is like picking a lock...

LEWIS: You press down and then you just wiggle, pop it open and, the abductor muscle right there. You clean that.

HOLSOPPLE: Lewis is the executive chef of Spirits & Tales at the Oaklander Hotel in Pittsburgh. She runs a small knife around the sides of a closed oyster shell... 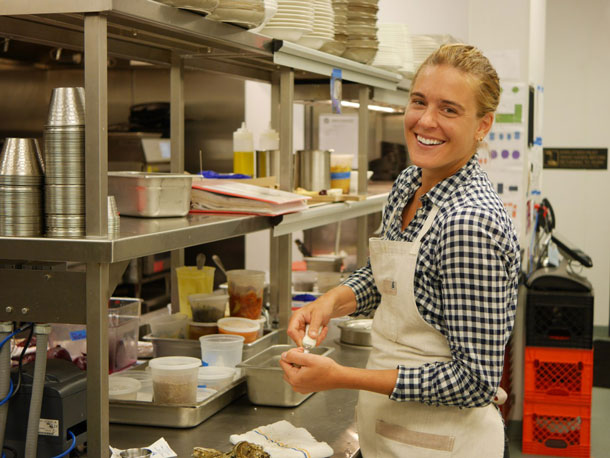 LEWIS: You can't really muscle through it. You clean under it and see all that liquor? This one’s got a lot of liquor in it.

HOLSOPPLE: That’s the salty ocean water still inside the shell, and it makes the oyster slide out smoothly...into your mouth...

HOLSOPPLE: Lewis says they go through about three to four hundred oysters here a week...from the East and West coasts. This oyster is from Maryland’s Chesapeake Bay...and its top and bottom shell are going back there…

Lewis and her staff toss the spent shells in a 35 gallon barrel with a screw-on lid, located in the trash area on the ground floor of the building.

LEWIS: So, nobody likes to recycle the oyster shells because there's flies everywhere and it's nasty. Gross

LEWIS: But we're doing something good. Let's get out of here.

HOLSOPPLE: About once a month a truck picks up the old shells from this and six other participating restaurants in Pittsburgh, and drives them more than 250 miles to a staging area just across the Chesapeake Bay Bridge in Maryland.

From there, the oyster shells from Pittsburgh, and ones collected from Maryland, Virginia and the D.C. area are taken to a site at the University of Maryland’ Horn Point Laboratory in Cambridge, for processing.

KING: “So here you’re looking at about 7K tons of clean shell…”

HOLSOPPLE: Karis King is with Oyster Recovery Partnership, a nonprofit which works to increase oyster numbers in the Chesapeake Bay. We’re standing at the base of a mountain of gray shells.

They’ve been dumped into a machine that’s like a modified potato hopper, which sorts the shells...

And washed with water from the nearby Choptank River...a major tributary of the bay. Smaller fragments of broken shell fall away as a conveyor belt deposits the half shells into wire cages or piles where they’re cured for a year.

Then they’re ready to go on to the next phase of the recycling chain...

KING: even with all the shell that we do recycle, and that we also purchase from shucking houses, we still don’t have enough to do large scale restoration, at the rate that we could.

HOLSOPPLE: That’s because of the scale of the problem. Stephanie Alexander manages the Horn Point Lab oyster hatchery.

ALEXANDER: When John Smith sailed up in the 1600s he was running aground on oysters...

HOLSOPPLE: Alexander says that’s before these waters were overharvested, before there was agricultural runoff and soil erosion from development...

ALEXANDER: We've pretty much wiped the oyster out to less than 1 percent of historic levels. So we started this restoration effort where we're using a hatchery to produce spat on Shell to put back into the bay so we can kind of help jump start Mother Nature.

HOLSOPPLE: The concept is pretty simple: Scientists here at the lab produce baby oysters from adults harvested from the bay, nurture the microscopic larvae with a custom algae diet, then get them attach to the recycled, treated oyster shells...that’s the ‘spat on shell.’

In practice, it’s a lot harder than it sounds…

Ben Malmgren is an intern here, a student from St. Mary's College of Maryland.

MALMGREN: Right now we're placing the oysters out on the spawning table where we are going to simulate river conditions that are ideal for spawning.

HOLSOPPLE: The saltiness and temperature of the water in the shallow black basins has to be just right. Malmgren places the oysters in a grid formation, so it’s easier to separate the males from the females…

MALMGREN: Because if we just let them spawn out on the table all these eggs are gonna go down to the into the drain. So once we see a female and we'll we'll know she's a female by she'll clap her top and bottom shell together and we'll see a plume of eggs come out and kind of look like Splenda like in a cup of coffee.

HOLSOPPLE: Then he’ll pull the females off the table, where they’ll continue to spawn in a tub. Those eggs will be fertilized with the sperm collected from the male oysters. But the oysters aren’t cooperating today…Left to their own devices, it could take hours...

MALMGREN: It's a lot like just watching a pile of rocks but can be exciting when they all start going. 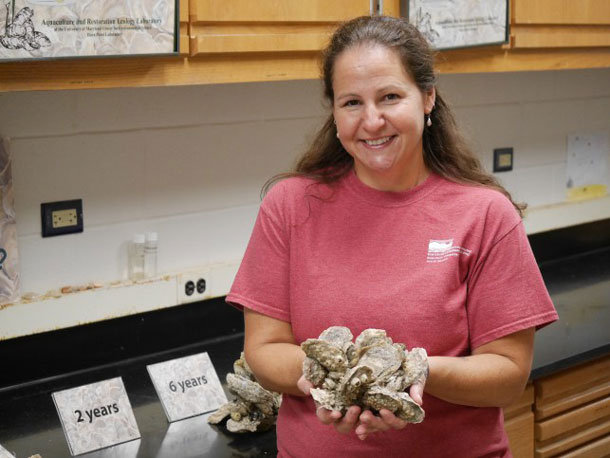 HOLSOPPLE: Even in the lab, nature is in charge. Stephanie Alexander says it was a slow summer...a lot of rain meant the adult oysters have lived with lower salinity levels, and they’re stressed. Out in the bay, the water is warmer, meaning the spat on shell might have a harder time growing that second shell, and over the years, forming the clusters that create oyster reefs.

ALEXANDER: When one thing gets out of whack everything else is going to kind of follow. So we're trying to get the oysters back into balance so then hopefully everything else will follow as well.

HOLSOPPLE: Over the last 2 decades, the lab and Oyster Recovery Partnership have planted over 8 billion oysters on the bottom of the Chesapeake Bay and its tributaries, with the help of other partners like the Maryland Department of Natural Resources and the U.S. Army Corps of Engineers. Throughout the summer spat on shell are released from a boat on sites where they’re most likely to survive. And Alexander says that’s critical…

ALEXANDER: Oysters are the vacuum cleaners or the kidneys of the bay and they just suck the water in, they decide if it's food or not food. But no matter what it is that will remove it from the water column and that's how they vacuum the bay up and clean it.

HOLSOPPLE: Because of this superpower, oyster aquaculture is a best management practice identified by the regional partnership that oversees cleaning up the Chesapeake Bay.

Some of the spat raised at the Horn Point Lab will make its way to oyster farmers, and those are the oysters on a half shell that are served in restaurants. But the majority of the spat will help rebuild oyster reefs, creating habitat for fish, and restoring the ecosystem.

BACK IN PITTSBURGH, Jessica Lewis is educating diners and trying to convince other Pittsburgh restaurants to join the oyster shell recycling effort that feeds the conservation work... to see the value in giving back...

LEWIS: With all this like climate change going on and all those scary things it's like a bright light shining through...that we did something good.

HOLSOPPLE: Her pitch: Every shell counts.

Learn more about oyster restoration in the Chesapeake Bay

This story was produced in partnership with StateImpact Pennsylvania