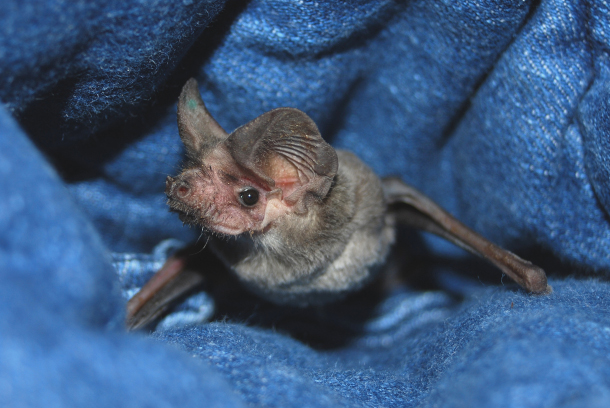 In Texas, this winter’s extreme weather delivered an unusual cold snap that some bats just couldn’t deal with. So, Mary Warwick, the Wildlife Director of the Houston Humane Society, sprang into action and along with help from Bat World Sanctuary saved around 1600 Mexican free-tailed bats from hypothermic shock. Living on Earth’s Paloma Beltran shares her story.

CURWOOD: This winter’s extreme weather delivered an unusual cold snap to parts of Texas, bringing below freezing temperatures to Houston. That’s cold that some local wildlife, including bats, just can’t deal with unless they get help as Living on Earth’s Paloma Beltran learned from a local wildlife rehabilitator.

WARWICK: I looked down and these bats look like large chunks of bark. They didn't look like a living organism, you know, they were just kind of, they look dehydrated.

BELTRAN: A few days before Christmas, Mary Warwick was walking under the Waugh Bridge in Houston and noticed hundreds of tiny Mexican Free Tailed bats lying on the ground. The fuzzy brown bats weighed just a few ounces and had fallen from the bridge above to the cold ground below.

WARWICK: You might not even realize there were a bat if you didn't know there was a bat colony above you. 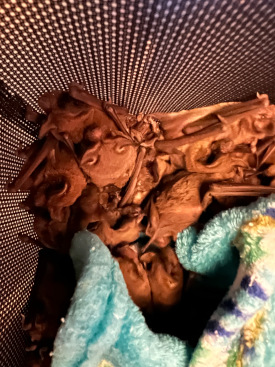 Mexican free tailed bats recovering from the Texas cold snap next to a blanket to keep them warm. (Photo: Courtesy of Mary Warwick)

BELTRAN: Mary Warwick is the Wildlife Director of the Houston Humane Society, which teamed up with an organization called Bat World Sanctuary to help the hypothermic bats. As a wildlife rehabilitator, she’s already been vaccinated against rabies.
So she sprang into action to nurse the first 138 bats she found back to health.

WARWICK: I didn't have anything really with me at the time. So I just went back to my car and found a box that was holding other things and dumped it out and got some Kleenex and put it in the bottom of the box and went back down. And this was during the day and put all the bats in the box. And then it was about 22 degrees out at that point. And so I put them on my seat and turned my seat on the heat warmer and then headed to where I live which is about 40 minutes away. And in about 15 minutes or so you could kind of see them starting to move a little bit, little feet stretching and stuff like that so that's a good sign.

WARWICK: So with any injured wildlife, they need two things immediately. They need heat support and they need hydration so they can't use food in their gut until they're warm and hydrated. So those are always the two things we do first so we get them warm and then we give them some subcutaneous fluids under their skin with a little tiny needle and syringe and get them nice and hydrated. And after that you can start force feeding them and things. Bats eat on the wings, so they fly to catch insects. If you put a bowl of insects in front of them, they're not going to know what to do and they're typically not the insects they would eat anyway, like mealworms, they're not what they would normally eat. So you have to force feed them. So it can be very labor intensive. 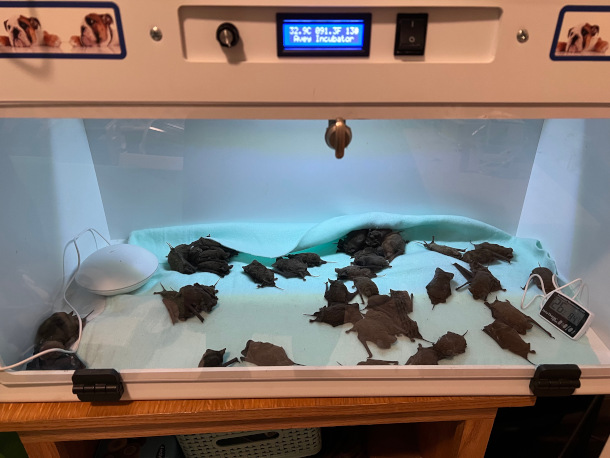 The freezing December 2022 temperatures caused Mexican free tailed bats found in Houston’s Waugh bridge to go into hypothermic shock, lose their grip from the bridge and fall to the ground. Some of the bats needed to be put in an incubator for recovery (pictured above). (Photo: Courtesy of Mary Warwick)

BELTRAN: The Houston Humane Society posted on social media that Mary was rescuing the bats by herself. But after that she wasn’t alone for long.

WARWICK: I think this is one of the most organic things I’ve been involved with in a long time because when people started hearing that I had picked up bats, they started going out on their own and picking up bats and then I was getting Facebook messages like I've got 50 bats or I've got 20 bats or whatever, can you get somebody to pick them up and so it just kind of became like an old fashioned phone tree kind of thing where everybody's reaching out and calling this person or that person. It was just the most hodgepodgey thing.

WARWICK: When I had 100 or 200, or something like that, myself and the people from Bat World could kind of handle that. And then we picked up 929 bats from another bridge the second night. So that really magnified the number of animals we had to take care of. And so it's impossible for us to force feed 929 bats plus the other ones we had. 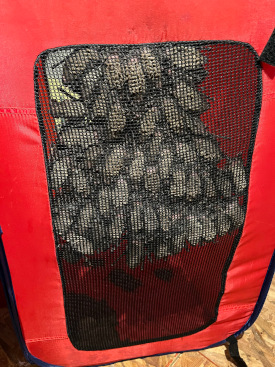 Around 1500 bats were kept safely inside several dog kennels in Mary Warwick’s attic as they recovered from hypothermic shock. (Photo: Courtesy of Mary Warwick)

BELTRAN: Mary had about 1500 recovering bats in large dog kennels in her attic.

WARWICK: So they were there Christmas day when I had family over for dinner, and coming in and out of the front of the house you could hear them through the attic door and they talk a lot because they're so social and so even though their metabolism was slowed down, they weren't in hibernation. They were still kind of awake and chatting to each other kind of like a slumber party. You know, everybody's just kind of laying around talking. They were just up there chatting away and they will get quieter sometimes and then louder other times. It's a great little sound to hear. 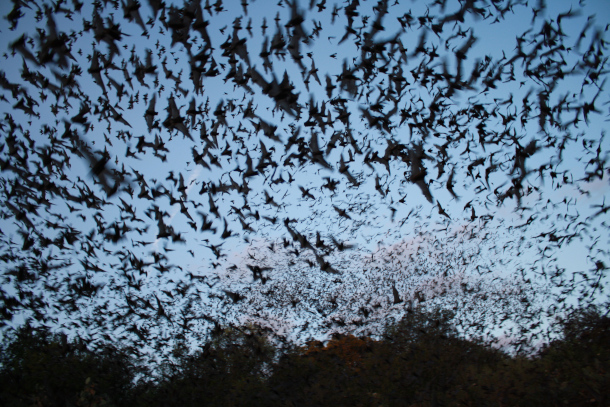 BELTRAN: After a few days of recovering in the dog kennels in Mary’s attic, the bats were not only chatting but flapping around and ready for release.
Mary says this wasn’t the first time bats have struggled with cold weather in recent years, and it is unlikely to be the last.

WARWICK: Since 2019, this is the third time this has happened with bats. We had another freeze in 2022. But it was so hard that we were trying to save human lives at that point, people perished in that freeze. So to tell you the honest truth, I didn't even think about bats. I was worried about my mother and you know, things like that. And so here it's happened again already. And so, you know, it's happening more often, more often. And then not only do we have the problem of that in the winter, but in the summer season when we can have hurricanes or big tropical storms which are getting worse, you know the bayou floods all the way up to the bridge and the bats can drown. So they are just really living on the edge now, and, and all of these things are tied to climate change.

BELTRAN: Thanks to Mary Warwick and a team of volunteers more than 1600 bats were saved from freezing to death in the recent cold snap. It’s a network of people the bats will likely need to rely on again, as climate change continues to bring unusually cold weather to Texas. 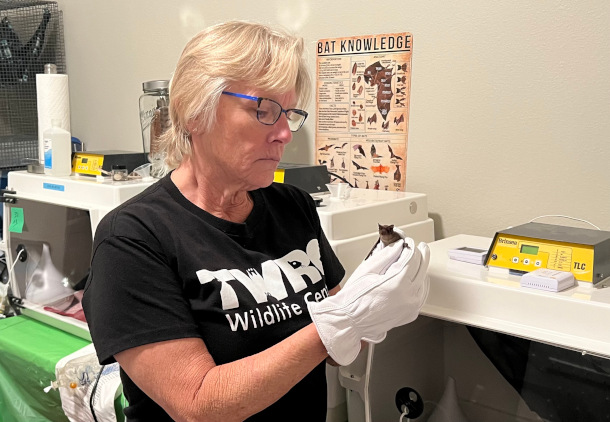 CURWOOD: That’s Living on Earth’s Paloma Beltran with Mary Warwick the Wildlife Director of the Houston Humane Society. To see a video of the rescued bats in Mary Warwick’s attic head on over to the Living on Earth Website, loe.org.


Learn more about the bats under Waugh Drive bridge