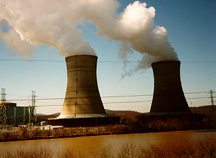 From movies and music to television and even board games, the accident at Three Mile Island quickly became part of American popular culture.

CURWOOD: It didn't take long for the accident at Three Mile Island to become part of the American experience. To knit itself into the fabric of the nation's popular culture. In fact, the process began nearly 2 weeks before the actual incident. When Hollywood released its version of a nuclear meltdown, in a film called The China Syndrome.

(Noise in the background)

MAN: If the core is exposed for whatever reason, the fuel heats beyond core heat tolerance in a matter of minutes. Nothing can stop it. And it melts right down through the bottom of the plant, theoretically, to China. But of course as soon as it hits ground water it blasts into the atmosphere and sends out clouds of radioactivity. The number of people killed would depend on which way the wind is blowing, render an area the size of Pennsylvania permanently uninhabitable, not to mention the cancer that would show up later.

CURWOOD: The scenario played out in the move was so similar to the reality of Three Mile Island that in retrospect the feature film is often described as documentary-like.

LEMMON: This is Jack Godell. We have a serious condition. You get everybody into safety areas and make sure that they stay there.

SNL ACTOR 1: What is happening?

CURWOOD: Once the immediate danger posed by the accident passed, Three Mile Island became grist for talk show hosts and comedy troupes. In this Saturday Night Live spoof, a soft drink spilled on a control room panel triggers a meltdown scare at the Two Mile Island nuclear plant. With art imitating life, President Jimmy Carter visits the crippled facility and gets a little too close to the melting core.

(Audience laughter; fade to music: "Takin' It To The Street")

CURWOOD: The accident at Three Mile Island also galvanized popular opposition to nuclear power. People took to the streets, and pop stars took to the stage. A group called Musicians United for Safe Energy, or MUSE, gathered for 5 nights at benefit concerts in New York City in September of 1979. The proceeds went to pro-solar organizations, as the likes of Bruce Springsteen, James Taylor, and Bonnie Raitt wailed against the perils of splitting the atom.

(Theme music from The Simpsons up and under)

CURWOOD: America's favorite animated family lives in the shadow of a nuclear reactor, and its patriarch Homer Simpson, works at the plant owned by the conniving Mr. Montgomery Burns.

BURNS: Homer, they're trying to shut us down. They say we're contaminating the planet.

BURNS: Can't the government just get off our backs?

CURWOOD: One of our favorite take-offs on the dos and don'ts of nuclear safety is an unofficial Three Mile Island version of the popular board game Risk.

CURWOOD: The object of the game, of course, is global domination. But if you roll the dice and come up with double-4s, 5s, or 6s, you melt the nuclear core and turn your territory into a wasteland.

(Music up and under)

CURWOOD: And for this week that's Living on Earth. Next week: down but not out: the nuclear industry says it has a whole new generation of safe and inexpensive reactors ready to meet the world's energy needs.

MAN: The AP-600 is designed such that even if there were a problem, unlikely as it is, an operator could literally walk away because natural systems such as gravity will take over the whole operation.